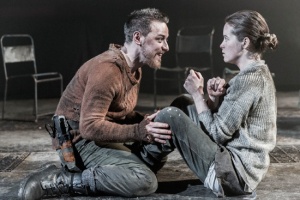 William Shakespeare’s tale of murderous ambition in Scotland gets a post-apocalyptic makeover by Jamie Lloyd, placing BAFTA winning Scottish screen superstar James McAvoy in the title role. After receiving a visitation by three witches who foretell of his accession to King, he is spurred onto regicide by his conniving wife. But guilt and power take its toll as the tyrannous king is beset by maddening hallucinations, and dogged a prophecy from the same witches that his rule is one that will ultimately fall.

Set mostly in a nondescript bunker of some near future determination, Lloyd presents his production as a harsh and violent one, two things which are quite inherent in what is the closest thing to a thriller that Shakespeare ever wrote. Deafening electrical fizz and flashing lights initially create a discomforting end-of-society and covert underground atmosphere, and Lloyd also doesn’t hold back on the gore. The problem is, after a while all of the above become tiresome and clutter the text and narrative. There is scant nuance in this production – everything is sound and fury set to pummel you in the face as much as it possibly can.

It’s a mash of style over substance. In the maelstrom of dystopia you get splatterings of Tarantino, Braveheart, and even video game God of War – the imagery is a mess. Witches burn flares for no reason as the play opens and then never do so again, appearing in gas masks and a bevy or modern paraphernalia from wire-cutters to battered tablet computers for no other reason than that they can. And a bewildering Greenpeace style protest regarding who-knows-what representing England struts and threats two minutes upon the stage and then is seen no more. If Lloyd’s production is being socially prophetic, it’s not a coherent vision.

As much energy and effort Lloyd pours into the grander themes and look of the play, ironically it’s when he stops faffing about with superfluousness and actually directs with detail that the production really comes into its own. Giving space for the actors and text to breathe in the air of his haggard and aggressive future really hits home what he is ultimately trying to achieve – a dark tense play full of sex, violence, fear, and loathing. McAvoy’s neurotic-cum-schizophrenic interpretation of the ruthless Thane is really entrancing to watch when given this time and space. When the theatrical din has died down, in between bouts of bullish machoism you can find him rocking back in his chair chiming out his troubled thoughts in a quivering and panicked voice. McAvoy really marks Macbeth out as a broken and fractured villain. Claire Foy’s Lady Macbeth is just as interesting. Her performance highlights an intriguing uncertainty and fragility in her character and in her resolution to pawn her husband into usurping the throne, and is distressing to watch in the famous sleepwalking scene.

Thankfully it’s only the first half that concerns itself with too much gimmick, and once the second half gets going with the overt over-theatrics left by the by it becomes incredibly high-octane and compelling.

Yet the overall impact of Lloyd’s production is shallow. For all the buckets of blood, boom bang-a-bangs, and gruesome props, its ultimate more ‘The Skittish Play’ than ‘The Scottish Play’. You leave the theatre entertained and a little punch-drunk but knowing that you’ve either seen a better production before or that there are better ones to come.

Half-Welsh, half-Chinese British writer living and working in Poland. Ex-theatre and film critic, and avid gamer, he has a passion for anything interesting. END_OF_DOCUMENT_TOKEN_TO_BE_REPLACED
This entry was posted on Wednesday, February 27th, 2013 at 14:51 and tagged with Claire Foy, James McAvoy, Jamie Lloyd, Macbeth, play, Trafalgar Studios, William Shakespeare and posted in Thing What I Saw. You can follow any responses to this entry through the RSS 2.0 feed.
« Theatre Review:A Woman of No Importance…Or Somewhat Little Importance Anyhow (Hen & Chickens, London)
Theatre Review: SIRO-A (Leicester Square Theatre, London) »