Theatre Review: The Curious Incident of the Dog in the Night-Time (Apollo Theatre, London) 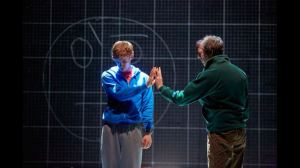 The National Theatre and Simon Stephens adapt Mark Haddon’s award winning novel into a stage spectacle. Christopher Boone (Luke Treadaway) is a reclusive 15 year old who suffers from Asperger’s Syndrome. When his neighbour’s dog is killed with a garden fork it sets him on a detective quest to find the murderer. But Christopher ends up discovering more than just whodunit which sets him on an adventure that will push him and his condition to the very limits.

Played out on a giant piece of graph paper, Bunny Christie’s set and Pauile Constable’s lighting design is astonishing, choc full of secret panels and hidden cubby holes and lit with an array of 3D projections. This suggestion of Christopher’s mathematical mind-scape is dazzling and unforgettable. But it’s not just the stage that is full of surprises. In this vast bare space Marrion Elliot’s direction uses physical theatre to create a unique and visually arresting internal world for Christopher to play out his story. From zero gravity, to wall walking, and fast forwarding, there is an abundance of imagination that’s almost too much to keep up with.

Treadaway is also fantastic as Haddon’s unlikely hero. His intense and unrelenting energy is matched by an acute detail to every aspect of his character, from the revered fidgeting and twitches, to the stilted meter of his responses. You’re just as invested in his performance as the tricks and treatsies of the staging.

The first act is utterly enthralling. Haddon’s narrative is full of intrigue and enigma which cast and creatives do superbly to augment through theatre. There are moments as well that are heartbreaking, especially during the revelation about his mother, making it difficult to disengage with even if you wanted to.

But Act II is an absolute let down. It’s as if Elliot et al had simply run out of ideas. The whimsy present in the first half evaporates completely, especially with a sudden clumsy self-awareness that appears without reason or warning. Scenes become fractious and quick with snap and unruly transitions as the production just trundle on to round off the narrative, rather than revel in the story as it did earlier. This contrast is a real downer after being so spoilt by Act I, and with very little heady high-theatrics to engage with the latter half drags, even with Treadaway’s unwavering octane. The only charm in Act II is provided by a gorgeous puppy, which whilst adorable, is cheap.

It’s such a shame that such a mesmerising opening act is marred by a lacklustre second. But for all its masterful stagecraft and strong performances, if you’ve already read the book you might as well leave in the interval to avoid being disappointed. But overall, you can just about forgive the faults in the second act for the undeniable mark the first leaves with you.

The Curious Incident of the Dog in the Night-Time plays at the Apollo Theatre, London, W1D 7EZ, until 4 January 2014. Tickets are £12-£85 (concessions available). To book visit www.curiousonstage.com.

Half-Welsh, half-Chinese British writer living and working in Poland. Ex-theatre and film critic, and avid gamer, he has a passion for anything interesting. END_OF_DOCUMENT_TOKEN_TO_BE_REPLACED
This entry was posted on Thursday, April 11th, 2013 at 11:14 and tagged with Apollo Theatre, Asperger’s Syndrome, drama, Luke Treadaway, Mark Haddon, National Theatre, The Curious Incident of the Dog in the Night-Time, theatre and posted in Thing What I Saw. You can follow any responses to this entry through the RSS 2.0 feed.
« Theatre Review: Mile High – The Musical (Lost Theatre, London)
Dance Review: The Rite of Spring/Petrushka (Sadler’s Wells, London) »

One response to “Theatre Review: The Curious Incident of the Dog in the Night-Time (Apollo Theatre, London)”