Face to Face Review: The Fall Of The House of Usher (Lost Theatre, London) 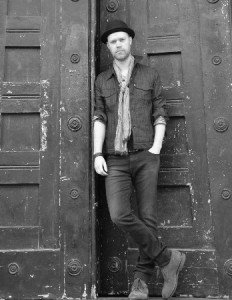 An ambitious reduction performed with intoxicating and engrossing theatricality.

NOTE: This piece is a work in progress.

As part of the Face to Face Festival of Solo Theatre’s evening of experimentation, musician Jamie West reduces the prog rock opera by Van De Graaff Generator front-man, Peter Hammill, with libretto by Chris Judge Smith, based on Edgar Allan Poe’s The Fall of the House of Usher, for solo performer.

The narrator is summoned to the house of Roderick Usher. Upon the apparent death of Roderick’s sister, Madeline, he convinces the narrator that she should be buried in the vaults below the house. But all is not what it seems and, days later, things start to go bump in the night in the tombs below.

Hammill’s opera is wonderfully accessible in the fact that his prog rock riffs and melodies are quick to hook. Judge Smith’s libretto also blends Poe’s Gothic prose with more natural language meaning that the high-poetry doesn’t stifle the flow of the music or seeming awkwardly inserted, but still gives the glory of Poe’s wordsmithing room to pierce through.

West has made some adjustments to the music, in trying to make it possible to perform it as a solo musician on only a single given instrument at any time. But West also admits changing some of the harmonies to make them more accessible and chime more with him personally as a performer. Whilst it might seem sacrilege to make changes to the actual operatic score beyond what is necessary, unless you’re a die-hard fan of the opera you’d never have realised it unless you already knew that this was the case. Even so, it still manages to flow and be catchy without feeling like a cheaper or changed version.

West has an astonishing voice that really lends well to the piece. His incredibly rich baritone voice is garnished effortlessly with subtle but thrilling vibrato. But whilst West’s voice is certainly divine to listen to, what makes him astonish here is his stage presence and sense of theatricality. The stage figuratively shrinks when he starts to perform, as he’s a musical story-teller of the finest pedigree. You hang on every note and blissful tremelando. He does a superb effort in bringing out the high drama and dark devices of Poe’s story and Hammill’s music.

One small criticism is that it;s sometimes difficult to get a grasp of what character’s voice is coming through at any given moment: it’s not immediately clear that it’s the narrator when spoken and Roderick when sung. Also, there’s currently the absence of Madeline from West’s reduction, with gender and vocal range being an obstacle he’s yet to tackle.

The main grumble is that, in it’s current form, the piece is far too short. Whilst you’re really starting to become utterly absorbed in the rich world West conjures, it suddenly ends, leaving you gasping for more. But hopefully as the piece continues to develop, the show will expand to be even more inviting and more satisfying than it currently is.

Musically thrilling and astonishingly performed, this bold reduction keeps the piece well away from the grave. Dark and hypnotic, it’s a dark and dexterous show that should only get better as it develops.

The Fall Of The House Of Usher was performed as part of the Face to Face Festival of Solo Theatre, which took place at the Lost Theatre, London, SW8 2JU, 6th– 11th October 2014. For more information about the festival, visit www.solotheatrefestival.co.uk.

Half-Welsh, half-Chinese British writer living and working in Poland. Ex-theatre and film critic, and avid gamer, he has a passion for anything interesting. END_OF_DOCUMENT_TOKEN_TO_BE_REPLACED
This entry was posted on Wednesday, October 15th, 2014 at 12:47 and tagged with Chris Judge Smith, edgar allan poe, face to face festival 2014, Face to Face Festival of Solo Theatre, face to face house of usher, house of usher opera, Jamie West, jamie west band, jamie west busker, Lost Theatre, opera, peter Hammill, solo theatre, The fall of the house of usher, van de graaff generator and posted in Thing What I Saw. You can follow any responses to this entry through the RSS 2.0 feed.
« Face to Face Review: Adult Child/Dead Child (Lost Theatre, London)
Face to Face Review: Martha Gellhorn – The Troubles Seen (Lost Theatre, London) »