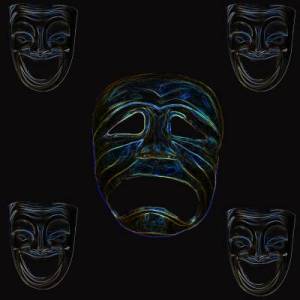 A nice giggly diversion of theatrical wit and heart, but steps on the jokes too much and could do with better comic pacing.

George is an understudy and has been called on to replace the lead. However, he’s not quite sure how he’s become an understudy because the last time he checked he was an accountant, not an actor. What’s more, he’s never been to a rehearsal and doesn’t even know what play he’s in: not helped by the fact that it keeps changing. Can George ever wake up from his nightmare?

I would be incredibly surprised if this play wasn’t based on actual nightmares of actual actors. For starters, this is a genuine nightmare I have myself: ending up on the stage in a production from school or university, unsure of my lines in-front of a full house! Writer Christopher Durang has very accurately made this feel like a very real bad dream, having things change on a dime with everything already jumbled up, including lines that aren’t at all in any of the plays George ends up in. What this does is give Durang a space to lovingly satire some theatrical staples, specifically Noel Coward, William Shakespeare, and Samuel Beckett. These are done incredibly wittily, especially Durang’s send-up of Coward. He teases out the foibles and idiocies of these beloved writers through George’s blunders, blending nightmare and piss-taking seamlessly at times.

However, there are moments when some of the jokes are stepped on a bit too much, specifically George’s never-ending soliloquy: after a while, you do want to end not just for George’s sake but your own. Also, the pace between skits and jokes drops a little too often. Something like this would benefit from a more rapid-fire application of the humour instead of letting the audience wind down too much between the laughs.

But otherwise, it’s a great concept and is genuinely funny. Whilst it could certainly do with some tweaking and tightening, it’s already more than halfway to being a great piece of new writing. In fact, especially given the brief 45 minutes run time, it’s a shame that Durang only limits us to the playwright’s he’s torn into here. You feel he can certainly tackle other notable writers with just as much grace and guffaws as those he already has, in a much longer play.

It’s always difficult to comment on direction and production in such a sparse small space: its a challenging environment to work in, let alone comment on. But Deborah Charnley handles it really well. There is some great use of space and lighting, managing to add variety of scene and pace as well as tricking the audience into thinking that the performance space is much bigger than it is. A solid and earnest effort that really pays off firmly supporting the laughs to be had in the script.

The cast really get the jokes – which you’d hope in a play entitled The Actors Nightmare! But because of this, they really revel in them, squeezing out every bit of humour that’s already there, especially in the over-the-top portrayals of our affectionately mocked playwrights’ characters. Particularly, Amelia Owen (playing Ellen on the night I saw it) wonderfully delivered her spoken stage directions in a thick South Wales accent to wonderful effect. Lead Giovanni Bienne (playing George on the night I saw it) really comes comically into his own when frantically neurotic, making it difficult to not raise a smile throughout, as well as getting you on board the concept of this being a nightmare.

Certainly worth dropping in if you need a good giggle for less than a tenner and an hour of your time. It might be a work that certainly has room for development and improvement, but even in it’s current state it’s still entertaining and is guaranteed to make you laugh.

The Actors Nightmare plays at the Phoenix Artist Club, London, WC2H 8BU, until 24 August 2014 as part of the Camden Fringe Festival. Tickets are £7 (concessions available). To book, visit www.camdenfringe.com.