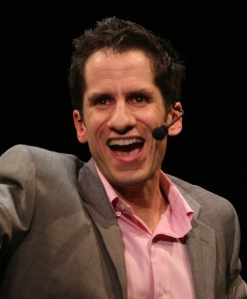 Seth Rudetsky is BACK in London next month, returning to the Leicester Square Theatre with his show, Deconstructing Broadway. This one man show is all about being obsessed with musicals and the people who perform in them, seeing Rudetsky take iconic and “ah-MAH-zing” Broadway numbers apart bit by bit with fierce aplomb and crystal-tipped wit.

In honour of his return from the Big Apple to the Big Smoke, he’s taken to YouTube to deconstruct “the queen of British belting” – the ineffable Elaine Paige – in her celebrated role in Evita.

If you haven’t already seen Rudetsky’s show, then don’t miss this opportunity to watch him tear into Broadway with style and substance like no-one else can, having garnered 5* reviews from me, GT, and Mark Shenton at his last London appearance.

He’s still got it!