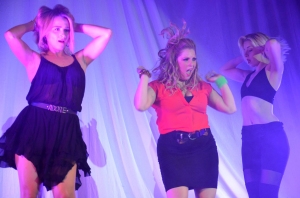 It might stumble a little on the catwalk, but its wit, sense of fun, and fierce compere makes this an incredibly entertaining evening.

Fashion: dazzling, daring, and fickle. As it’s an industry so full of divas and drama it’s no surprise that it makes for a good subject for a musical. It’s no further surprise that, capitalising on this, Fashion Victim – The Musical! is full of as much pizzazz and punch as Naomi Campbell’s mobile.

After the success of the earlier Edinburgh Fringe version, writer Toby Rose has made alterations and accessorised Fashion Victim – The Musical! for a London debut, having interestingly resorted to crowdsourcing for the funds to build a custom catwalk and hire a suitable venue for the venture. Ending up in the little known but none the less stunning space of London’s The Cinema Museum, is the result more Prada than Primark?

Rose is no stranger to outrageous camp wit, especially being the founder of the Palm Dog Award: a prize for the best canine performance in film. Consequently, Rose’s writing is full of unabashed satire and vicious pokes that are aimed not only at the fashion industry but pop culture as a whole, meaning there are plenty of punch lines and gags to keep you chortling. Those less fashionably inclined might miss a few of the references, but nothing is really so obscure that it would go over too many people’s heads.

Therefore, it’s as shame the thrust of the story is as shallow as the industry it’s sending up. A thinly veiled and pedestrian cautionary tale, it doesn’t really offer anything deep or original. In fact, because of this Rose doesn’t quite manage to keep up the octane of the show as it sashays towards an all too predictable conclusion. But thankfully, its overall humour, production values, and cast makes up in bounds for what the plot lacks.

Cayelan Mendoza pens a score that has variety and energy, managing to capture the anarchic chic of the show. Admittedly, whilst there isn’t really anything you’ll come away humming, none of the songs feel third rate or uninspired. Indeed, if you pay close enough attention to the lyrics, there’s a definite intelligence and sharpness: the only thing that really fleshes out otherwise ordinary characters and story.

Rose has managed to pull out all the stops in getting a top-notch creative team on board for Fashion Victim – The Musical!. Director Robert McWhir (also Artistic Director of the celebrated Landor Theatre) works incredibly well with TV choreographer Ryan Jenkins to fill the catwalk with colourful action and scintillating dance. But it’s great to see McWhir spend as much attention to bits that happen as asides and off the stage, giving the whole show a real sense of spontaneous cabaret which bolsters its sense of unbridled fun.

Richard Lambert’s lighting design also adds some unexpected nuance, particularly through his use of spotlight, paying a quiet homage to the venue, even if, on the surface of things, they seem a little juxtaposed.

As the vivacious and devious Mimi Steel, Rosie Glossop finds time within the production to wow the audience with the sheer power of her brilliant voice. Yet, it’s a shame that these are but small moments that allow her talent to shine as the writing of her character doesn’t make full use of her abilities. However, alongside our hero James Wilkinson as French male-model superstar Cedric Chevallier, they both bounce a keen sense of joyous pantomime against each other to great comic effect.

On Wilkinson’s part, again the superficiality of his character doesn’t allow a proper glimpse into any talent he may have. It’s also a little disappointing that he finds it difficult to project his singing voice in the lower range of his register, even though mic-ed up, meaning that his one big solo number is lost among the music. But when he’s singing higher in his range in some fab little duets with Glossop, and/or when he gets his shirt off (see picture), he is certainly forgiven.

Yet it’s really Carl Mullaney that really steals the show. As host, narrator, and compere for the evening, Mullaney is the real star at the helm, piloting the show at full steam ahead. Feeding off the audience’s energy and reactions as well as interjecting with a litter of marvellously knowing quips, it’s worth going to see Fashion Victim – The Musical! just for his company and entertainment alone.

It’s hardly high theatre, but it’s wholly entertaining. It’s camp catwalk kitsch at its best, and if it’s a carefree and laugh-a-minute evening you’re after then you should be killing for a ticket for Fashion Victim – The Musical!

Fashion Victim – The Musical! plays at The Cinema Museum, London, SE11 4TH, until 5 July 2014. Tickets are £10-£20. To book visit www.fashionvictimthemusical.com.