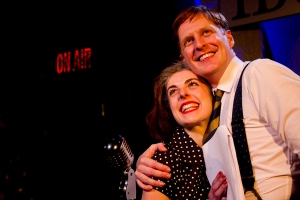 Proof that all you need for great theatre is a good story and brilliant storytellers. The production finds an ineffable charm in its resourcefulness.

George Bailey is a man with great ambitions. Yet his good nature has meant he has never been able to leave the sleepy up-state New York town of Bedford Falls. And now, things have come to a head and he’s contemplating suicide. But can rookie second class angel, Clarence, intent on earning his wings, be the one to convince him that he really has a wonderful life?

If I’m going to be upfront about things, I’m going to have to admit that, for all it’s praise, I’m not a huge fan of the film of It’s A Wonderful Life: even though it’s synonymous with Christmas and considered one of film’s all time greats. Yet famed radio-playwright, Tony Palermo, in his scaled back and succinct adaptation, has managed to find a different and hidden magic in the tale through it’s resetting. It might just be actors speaking into microphones accompanied by live sound effects, but he’s managed to still find a pace and an imagination that is difficult not to get drawn into. It’s an excellent radio play, even it’s being performed on stage. Palermo’s focus is, in his own words:

“…presenting theatre audiences with an authentic and delightful experience of radio drama in its heyday.” – www.ruyasonic.com.

He achieves this wholly and effortlessly.  Most astonishingly is, that despite the bareness of the concept, the children in the audience were completely hooked: something I had not expected, and speaks volumes for the show’s ability to engage and enchant.

The production’s setting the show as a local Penge 1949 live radio broadcast adds even more charm, including 1940s style adverts for actual business. Actor Daniel Hill also does a wonderful job of playing the broadcasts’ host too, working the crowd and creating a friendly and festive atmosphere. All in all, it not just create a sense of nostalgia but a palpable sense of time-travel.

If you think that mainly getting a cast together to speak into microphones would make for lazy direction, you’d be wrong. Guy Retallack ensures that he never drops the ball and adds wonderful nuances throughout the production. There’s still plenty of interaction between characters, and they often ignore the mics and focus on each other, responding directly both physically and emotionally among themselves rather than just at the microphones. Retallack also makes great use of the small stage space, having actors muster and perform at the back of the stage even if it be feet away from the front, as well as make use of the passageway towards the dressing rooms. In fact, you almost forget the microphones are there and are engaged in the action as if it were a play rather than a radio broadcast. Retallack has added myriad visual details to something that doesn’t require it, and in doing so has incredibly elevated it into something extra special.

Elsewhere, Susan Burns on the sound effects is always on cue, adding an aural colour where visuals are missing. Whilst Fiona Martin’s minimal set of retro mics and “On Air” sign, coupled with the beautifully tailored period costumes, add further suspension of disbelief that the theatre space is a time casual fresh from 70 years ago.

It’s an incredibly resourceful production, but it has ensured that at every step of the way it’s frugal necessity is converted into inescapable charm.

I really can’t think of anyone to pick out in particular from the cast as they’re all top notch. Each and every one of them are not just great actors, but brilliant storytellers. Working with nothing but themselves and very few props, they manage to conjure up a lost era of a small town far overseas without having to force anything or try too hard. They’re as integral to the magic as the script and the production, and have the audience hang on every word and command their every attention when executing their craft: it’s utterly bewitching.

What’s more, as many of them play several characters, they switch instantly between them, not just in voice but in stature and physical characteristics that gives a striking visual difference as well as an aural one.

It’s a Wonderful Life – The Radio Play is a wonderful time-warp. A warmth and heart that’s moving, unfathomably cosy, and steadfastly brilliant. Palermo’s writing and Retallack’s cast and production add an unexpected and surprising magic to, and perhaps even bettering, a story that has long been a pinnacle of Christmas.