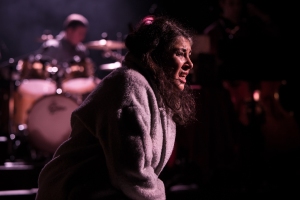 An entertaining revue, but too often forgets what it’s supposed to be celebrating.

Belgian chanson artist extraordinaire, Jacques Brel, is given a slick and sassy revue in the old Victorian music hall that is the Charing Cross Theatre, using songs that span the length of his career.

Brel is not a singer songwriter that is widely known these days. I must confess that he’s not an artist that has featured in my life much, if at all. However, the show serves as a wonderful introduction to his work. Very “French” in style, his works are often dark and sarcastic, spiked with spite and disenfranchisement with the world. Particularly coming through is his anti-war sensibilities, having lived through the Second World War and other conflicts. But elsewhere there are deeply touching and beautifully doomed observations about life and love. Whilst his songs are extraordinary, what’s more so is the fact that they’ve unjustly disappeared from the psyche of modern culture.

It’s bold and refreshing that Eric Blau and Mort Shuman have opted for a revue rather than the usual jukebox musical format. However, it’s risky as it means that the audience is going to be limited to those who are already aware of Brel’s work, or the more adventurous/curious of London’s theatre-going crowd. Thankfully, Brel’s pain and poetry is enough to hold your interest in lieu of a narrative.  Especially when songs are themed together to give the evening some form of structure, such as a section exploring Brel’s take on death and old age, to one grouping together his anti-war songs.

However, whilst the songs and the performers certainly entertain, it too often seems like the entire production keeps forgetting just what it is it’s celebrating. Rather than revelling in the angsty and sardonic nature of the songs, many of them are played for laughs that just aren’t there, or worse throws Brel’s original context out the stage door with the bath water.

That’s not to say that these somewhat misinterpreted reinventions of Brel’s songs always fall flat. Numbers such as “Funeral Tango”, though loosing it’s original pathos, is still incredibly entertaining. But when it misses the mark, it does so spectacularly. The woeful 80’s rock setting of “My Death” is so outlandish and missing the point that it’s painful and embarrassing to sit through. Then there’s a completely misunderstood version of “Le Bourgeois”, titled and sung in English as “The Middle Class”, even though it’s clearly a song about the upper classes. Though it interestingly the production used it as a vehicle to try and send up the current crop of politicians, it’s point seemed muddled and lost in translation. And when Nigel Farage strides in unannounced, you start wonder about what the show’s trying to say with this song, and all is suddenly muddled and lost.

What works well is when Keats decides to stay close as close to Brel’s original intentions and emotions as possible. “Sons Of”, “Song for Old Lovers”, and “Ne Me Quitte Pas” are haunting moments of the evening and the only times when the production does any real justice to Brel’s work. Otherwise, as mostly amusing as the rest of the show is, it’s a show about Brel that doesn’t really get what Brel is about. If you take the time to listen to Brel’s performances of the songs on the set list, you soon realise just how far and how often off the mark the production is with his songs.

To go along with Keats misguided interpretations of Brel’s song is a cast that seem also as clueless about Brel’s intent as the production. Performances from some of the cast are unnecessary over-dramatic. There are times when pathos is turned into pantomime at the hands of some of the cast members, compounding this sense that the show doesn’t understand it’s own content. Eve Polycarpou is the only cast member that gets it consistently right. Her performances of “Sons Of” and “Ne Me Quitte Pas” are utterly spellbinding and heartbreaking. Compared to the others, she steals the show and you become a little impatient when she’s not on stage, wanting her to return to the spotlight with haste.

Overall, the show is slick and entertaining. Even if you’re not complete aware of how important Brel was as a artist (like I was), you still get the sense of his depth and genius here. It’s just a shame that the show itself doesn’t fully comprehend it at times.

Jacques Brel is Alive and Well and Living in Paris plays at the Charing Cross Theatre, London, WC2N 6NL, until 31 October 2014. Tickets are £12 – £29.50. To book, visit www.charingcrosstheatre.co.uk.