A wide selection of hilarious, challenging, and heartbreaking plays on female identity and womanhood executed with grace, variety, and interest.

Tired of the gender imbalance in British theatre writing, The Thelmas – director Madelaine Moore and producer Rhiannon Story – have given six of the UK’s most formidable female writers the carte blanche of writing a short play for a solo female actor. The result is an interesting mix of love, loathing, obsession, loneliness, and courage that explore womanhood, femininity, and female identity.

Opening the hour was probably one of my least favourite. But that’s not to say it’s the weakest, or that it’s badly written or produced; it’s just the most challenging. Dromgoole’s Year 9 teenage girl blurs the line between feminism and sexism – spurning her teenage-mother friend for tying herself down with a child, whilst giving into dizzy infatuation over a 15 year old boy and imagining herself as a subordinate “good wife”. Although, the general tone of the piece is comic, strong sexist language and submissive sexual imagery makes it dark and uncomfortable at points. Whilst it does make you think about how modernism is defined and portrayed to young women, it’s a little difficult to wholly connect in how uneasy it makes you feel, especially when other audience members are laughing at these more twisted moments when they probably really shouldn’t be!

Rhiannon Story acts out the role with a real youthful electricity, both in her energy and her body language. Even if she can’t quite cream the butter for her cake on stage properly, she exudes a fizzing personality that she uses to bounce off the audience, making them feel very much a part of Droomgoole’s character’s world.

Again, whilst by no means is badly written or produced, this is another of my least favourites because it’s the least surprising. It tells the story of an older single woman who becomes obsessed with a male escort. But Jay’s character-centric approach to the subject lifts it from being ordinary. It really is a no-holes barred look at one woman’s unhealthy obsession with the idea of a perfect gentleman that she is literally buying into. The erotic is mixed seamlessly with the remorseful, and although we do get a hint of dangerous desperation towards the end, her character is natural and real, never becoming a person that is sensationalised or exaggerated. Despite the extreme situation the narrative has placed her in, she’s not the crazy or deranged spinster which she so easily could have been, she’s a character of human depth and reality.

This is bolstered by a superb performance by Louise Templeton. She constantly fidgets and twitches with addiction and anticipation whilst emanating a slick and devilish “cougar” quality, all juxtaposed with a devastating vulnerability. A superlatively tragic femme-fatale if I ever saw one. 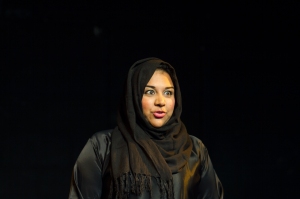 Cultural identity is a difficult enough subject to brooch without bringing cultural perceptions of womanhood into the equation. However, Mir manages to tackle these head-on and with a crystal-tipped wit and honesty that makes this monologue one of the most uproariously laugh-out-loud segments of the evening. Mir’s tale of the perils of being a late-twenties Pakistani “coconut” (brown on the outside, white on the inside) is blunt to the point of hilarity. The wry observations of the people and the perceptions surrounding her character are brazen but bristles with the humour that can only be found in a fondness and affection. Whilst there isn’t any “happy ending” per se, it’s an incredible and heart-warming look at culture vs. femininity that is enlightening as it is rib-tickling.

Sukh Ojla demonstrates her ability as a barnstorming comic actress. Her timing and timbre is enough to put some comedians to shame. She exalts the comedy of Mir’s text with real gusto, but also with a real connection and empathy. If it wasn’t for the programme notes, you’d have been fooled into thinking that Ojla had actually written this herself given the organic ownership she takes of the performance.

Body image is a subject that is littered with a lot of extreme and sensational stories. Yet McCullough, through her character, has crafted a monologue that brings a quiet and heartbreaking humanity back to the issue. It starts off somewhat comic, with her character finding a cheerfully sweet sense of self-deprecation about her weight. But as she begins to open up, we start to see a darker more destructive side to the damage body image can do to someone. It soon becomes a crushing account of how low and emotionally destroyed body fascism can bring someone, and is touching to the point of tears. The framing device of Ella making an audition tape cleverly puts the audience in the place of invisible voyeurs – ever prying whilst distant and detached, augmenting Ella’s sense of isolation through judgemental peers.

Jayne Edwards gives a wonderfully natural performance as Ella. Her portrayal of the distraught state she’s been bullied into is incredibly raw and affecting, leaving the audience haunted. 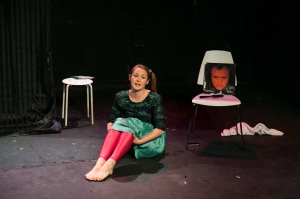 Danielle Nott in “Take A Look At Me Now” by Serena Haywood. Photograph: Vincent Rowley Photography.

Take A Look At Me Now, by Serena Haywood

Haywood, who’s show Pause was a tremendous success at last year’s Camden Fringe Festival, presents something a little more light-hearted and completely unhinged for Ladylogue!. Her character is preparing for the ultimate imaginary date with Phil Collins in the comfort of her own living room. Absolutely mad cap, there are some side-splittingly funny jokes and quips in this over-the-top examination of female romance and sexual fantasy. Haywood’s handle of one-liners, including a spot of “dildo-blindess”, are supreme and really give the piece a fire-cracker quality. But what’s great is that, despite how outrageous it is, Haywood still manages to find a relatable sanity, especially in the slightly darker undercurrent of her character being driven to this mania through the small cruelties of her previous partner. But otherwise, it’s tender, truthful, and completely nuts!

I Would Be Brave, by Sarah Hehir

Undoubtedly the most different and serious piece of the evening. Hehir’s glance at domestic violence from the viewpoint of a concerned neighbour with limited resources to help is original and moving. Making this particularly powerful is that her character, whilst trying to do her best in a culture that would rather leave others to themselves, is having to face the realities of her own health and relationship. Hehir writes with a deft and colourful poetry that vividly paints scene and emotion through her words, making it incredibly as engrossing to listen to as to watch being performed. There are also some powerful little bits of imagery, like the wall at the end of the lane blocking off the rest of the world, fortifying the feeling of the intense microcosm that the character finds herself in. It’s these touches that really elevate the short into being a complex and intelligent piece of writing. There is a good deal of ambiguity that runs throughout, leaving the audience to ponder and wonder about some of the things that are unsaid but also, more importantly, why they’re being unsaid. But it does mean that it’s a little unsatisfying as these are never tied-up in any conclusion. Otherwise, it’s an incredibly different and emotive piece.

Amanda Reed’s performance/recitation is prefect. She trips dexterously through the metre and language of Hehir’s poetry whilst exerting a strong character and presence on the stage. It’s impossible to think of any better casting for this monologue.

A varied and exuberantly entertaining evening of some brilliant new writing. Whilst some pieces are more original and accessible than others, the bar set by these “ladies who ‘logue” is as dizzying and astonishing as the pieces they’ve produced.