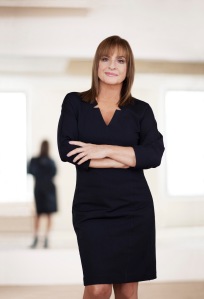 On the face of it, it seems mad that one of the grande dames of the Golden Mile should be playing such a humble, albeit well known, venue, especially when Kristin Chenoweth (almost) played to a sold out audience at the Coliseum earlier this year. However, with New York musicals producer, musical director, and radio chat show host Seth Rudetsky compeering the evening, you soon figure out that it couldn’t have been a better venue for such a marvellously intimate and informal show.

Rudetsky opened the show explaining his love of “belters”, and therefore his obsession with LuPone, through some of his hilariously observant trademark “deconstructions” of famous, but mostly infamous, musicals performances. But at the same time, he also lets us know that this is a relaxed show where not only will LuPone sing but he’ll also sit with her and have a chat as if it were his own talk show.

After a chortlesome warm-up from Rudetsky, it was time for the real star of the show to come on, and LuPone did not fail to deliver. To use Rudetsky’s own catchphrase, she’s certainly “still got it”. Every song she sang brought the house to roaring applause, especially with plenty of numbers from Evita, the show that essentially propelled her to legendary status after winning a Tony Award for her performance.

But instead of taking the chance to revel in ego and ham up the songs like some artists do in shows like these, LuPone still ensures that none of the subtleties and emotions are forsaken, but at the same time not holding back on any of her acclaimed power despite being in such a humble venue. She made me fall in love all other again with ‘I Dreamed a Dream’ from Les Miserablés, for which she was the original Fantine in its world premier, after its over exposed butchering by Susan Boyle, and showing Anne Hathaway how it’s supposed to be done.

But she and Rudetsky also took the time to demonstrate her range and experience through doing songs from musicals she’s been involved in that have yet to reach London such as The Robber Baron and Women on the Verge of a Nervous Breakdown, adding a nice touch of variety. On the night I saw she also did a heart wrenching ‘Everything As If We Never Said Goodbye’ from Sunset Boulevard, which saw herself almost burst into tears during. This was contrasted with the shameless gusto of (my absolute favourite) ‘Ladies Who Lunch’ from Company.

But what was most enlightening about the show was the moments LuPone chatted to Rudetsky. Being so relaxed and comfortable with him meant that she was incredibly candid and honest, providing a real and unprecedented insight into the world of musicals and her own career. These include some rather juicy insider accounts from the wings, and a rather unexpected opinion of Madonna.

Furthermore, with Rudetsky never quite getting LuPone to sing the exact same songs on any two evenings, or even ask the same questions, there’s a real sense of dynamism and energy that runs through the entire thing; despite having gone on for a full week already it didn’t feel stale. The result was an incredibly intimate and joyous evening with an amazing performer.

Then, for one night only, Rudetsky treated London to his own show, Deconstructing Broadway. His “deconstructions” consist of him getting right into the minutia behind some “ahmaazing”, both bad and good, performances. However, instead of just pulling apart clips and recordings, he takes the time to explain how to “deconstruct” and also explain what goes into being a great musicals singer.

Rudetsky is a fantastic comic, but this was by no means a comedy show. What it actually was is a very very funny lecture on the ins and outs of performance and how to analyse it. Isolating certain idiosyncrasies of performances for their great or terrible examples of how and how not to do things, illuminates the audience to details that would otherwise go unnoticed and uncommented upon. He then puts his humour to glorious work giving a side-splitting commentary and dissection of these. This structure and approach meant the show never got dull as it was as engagingly educational as it was entertaining. It’s certainly wasn’t a cowardly swipe at celebrities or a snide exposé, especially as he himself didn’t escape criticism: it was a wholly humorous and academic look at aspects of the musical stage and the potential glory or train wreck of the human voice.

With two perfect personalities performing two perfect shows, anyone who saw either or both of these shows during their time in London will have left all the more enriched and enlightened for it. Ahmaazing.

Patti LuPone played at the Leicester Square Theatre from 16 – 23 June 2013, and Seth Rudetsky: Deconstructing Broadway on the 22 June. For more information on the venue, visit www.leicestersquaretheatre.com.