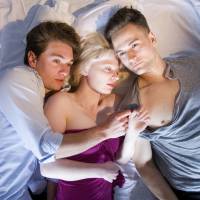 Directed by Suzy Catliff, this play is set in Lewisham, where we find Bradley, a timid and hard-working student, desperately trying to find a cheap place to live so he can continue his studies. Replying to an advert for a “room”, he ends up in Pinko’s rancid bedsit faced with only a bed in a corner behind a shower curtain. Coerced by the slovenly American’s knock-down rent offer, Bradley moves in. But when Pinko, after a drug and alcohol-fuelled binge in Soho, brings home Polish masseuse and holistic therapist, Ania, she ends up uncovering aspects of all their personalities and fears that none were expecting.

At the beginning, the comedy is quite fun. The laughs are found in what nuances Pinko, Bradley, and Ania’s personalities bring out in each other, rather than relying on the clash of personalities and the living situation. Therefore, the jokes are surprisingly wry, honest, and refreshing, despite being a scenario akin to 1970s American sitcom, The Odd Couple. The dialogue is a little stilted, but you’re laughing, so it’s not a massive issue.

However, award winning author, Stewart Permutt, decides that what the play really needs is to career towards something darker and more serious. Whilst it is always worth exploring deeper human emotions such as belonging and affection, it means that all too quickly the play loses its quirks and charms, and starts to drag, with laughs suddenly few and far between.

Without much warning, the already chauvinistic and alpha-male wannabe, Pinko, turns violent, causing a whirlwind of cataclysms to sweep through the plot. And when severe mental health issues crop up with an approach that is shallow and trying hard to shock, you’re not quite sure where it’s all going. Furthermore, you really start to notice how forced some of the dialogue is, and it starts to grate.

It’s a shame that it veers from quirky comedy to overwrought drama in such a way, because both the comic and the tragic elements are actually not bad on their own merits. Having already highlighted the quality of the comedy, with the tragedy, once you strip away the troubling simplicity of how the mental health issues are dealt with, you actually have quite a poignant piece about how relationships play out when it comes to love, lust, and the longing for companionship. If the more sensational side of the play was less melodramatic, it might have be a bit less schizophrenic and more of a consistent and lighter evening.

The cast behind the show are very good. Price Lindsey, as Pinko, is so testosterone fuelled and over-masculine that you genuinely flinch at his cocksure, brash, and over-sexed antics, and feel intimidated by his bully-boy tactics. Louis Cardona, as Bradley, is also wonderfully shy and politely long-suffering of his bullish housemate from hell, and palpably exudes the tenderness that endears Ania to him. Ruby Snape, as Ania, is also on top form. Although possibly the most level and “normal” character at the start of the play, when her desperation sets in, she turns into something sweetly sinister and grossly manipulative; a marvellously subtle but equally hideous character transformation, performed with quiet panache.

All in all, it’s still a decent night out, and does leave you pondering about how we interact and relate to one another. You also, oddly, find yourself even a bit sympathetic towards Pinko in his eventual downfall. Ultimately, you laugh, you feel, and you leave the auditorium thinking. That, in itself, is reason enough to go.