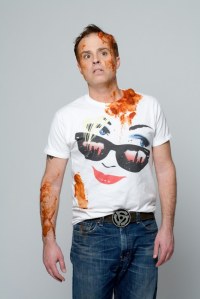 Back in 2007 there was a show that was even more commercially and critically mauled than Viva Forever, which announced today that it’s to close in little over a month. The show was Desperately Seeking Susan, a jukebox musical based on the film starring Madonna and using the music of Blondie and Debbie Harry. 6 years after one of the most panned and shortest running shows in the West End (it lasted only 13 days) its creator, Peter Michael Marino, has penned a one man show to analyse just what went wrong. After its huge success at the Edinburgh Fringe, he brings it to London for several weeks.

Marino is flamboyant and energetic and it’s difficult not to get sucked in by his camp charm and humour. There’s a real sense of joyful abandon that doesn’t wane throughout the whole show, despite how bitter and twisted he could be about the whole affair. But it’s not just his wit that drives the show. Part of his wonderful arsenal of talents is his delightful ability to portray the various characters involved, from the high-art English director to the fretful diminutive chorus-line dancer. All are keenly observed and excellently executed with great comic force, making them as personable as they are comical.

One of the main staples of his routine is, unsurprisingly, comparisons between British and American sensibilities and language. Despite how tired such a device can be Marino’s observations are actually quite fresh and funny. Furthermore they aren’t included merely for cheap and easy amusements, as meandering as some of them are, but illustrate the very relevant problems of culture clash that contributed partly to the musical’s downfall. It’s all part of a very deliberate formula.

Though Marino does not need much direction, director John Clancy actually adds subtle touches that enhance the show. There are little details from the pattern on Marino’s handkerchief to the significance of his t-shirt, both really well placed to compliment Marino’s persona and story. There’s even a bottle of ‘fagners’ that turns from mere refreshment into a relevant talking point and a scandalous prop. But most importantly Clancy’s tempering of pace and control over Marino’s glorious wittering keeps the momentum going, preventing it from devolving into unstructured prattle.

The only issue is the same issue that I have with almost all American one-person shows: the element of rehearsed spontaneity. However Marino does carry it much better than most, meaning it isn’t as irritating as others. But it’s still a shame as the moments where he’s more himself rather than the best imitation of himself are much more endearing and charismatic. Also, being press night he started off a little shaky, sometimes forgetting what part of the show comes next and seemed a tad too aware of the audience’s reaction, which in fairness is a little unavoidable in such an intimate/cramped space such as the theatre’s ‘lounge’. But eventually he became more and more comfortable with the show and finished with a flourish of confident gusto.

Despite the inglorious name-dropping, scathing bitching, and the acerbic observations, what really marks the show’s success is that he takes us through the waddle the musical took towards disaster with a surprisingly deft objectiveness and humanity. It’s a hilarious yet astute essay about a train-wreck, demonstrating that a great idea can be turned into a catastrophe simply by consistently having the wrong people making the wrong decisions.

Desperately Seeking the Exit plays at the Leicester Square Theatre, London, WC2H 7BX, until 20 May 2013. Tickets are £12.50. To book, visit www.leicestersquaretheatre.com.