NOTE: Having stumbled upon this show completely accidentally last week, I endeavoured to get this up last weekend whilst it was still on. Indeed, I had even completed the initial draft of the review on the Friday. However, with my weekend turning into something of a exhaustion induced coma, things didn’t go to plan. However, if the Caravan Theatre and writer/performer Sammy Kissin can forgive me, I still think what I saw deserves a written testament. So although this review goes up rather late, it does so with with my sincerest apologies. 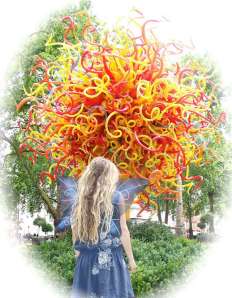 Two rich and imaginative solo pieces that enchant and rivet.

Writer and performer Sammy Kissin performs two short works in a golden caravan parked outside the Tate Modern, as part of the Merge Festival. Dregs is a piece about a fairy who gets trapped inside a bottle of merlot, and Mary Louise lets us in on the musings and reminiscences of a ship’s figurehead up for auction.

Across both pieces, Kissin demonstrates that she is a writer of incredible imagination, lilting language, and playful pathos. In Dregs, she clashes both the mystical with the mucky, as we hear the sad tale of how Dregs, a fairy, gets lured into a wine bottle by a troll, only to start what would become a descent into alcoholism. Whereas in Mary Louise, Kissin turns her creativity to personifying the life and experiences of a busty and bolshy ship’s figurehead. Everything she writes is well thought out and full of aching tragedy and fascinating intelligence. These are characters on the fringes of both our world and theirs, that still somehow manage to connect and speak to both the mind and the soul, through the glory and the grit of their tales.

Most impressive, though, is Kissin’s employment of language. Rich and luscious, there’s a splatter of the Jacobian greats in how it bounces and trips through vocabulary and metre. There’s an incredible sense of poetry that runs through both pieces from start to finish. Kissin is almost like a modern-day Marlowe, and it’s so rare to hear performance prose of such beauty crop up on the London new writing scene, let alone in such an unexpected and obscure place.

Kissin really embraces her prose and her characters, performing with a delicate but sturdy energy. But there’s two things that really hold back what would otherwise be an exemplary show. Firstly, whilst I’m all for theatre in odd spaces, the golden caravan as charming and as out-of-place as it is on the banks of the Thames is perhaps a bit too small. It’s not that it’s a tad too “cosy” for the audience (of which up to eight cuddle up at any given performance), but you get the sense that it’s too cramped for Kissin as well: not so much physically, but for her presence. You really get the sense that her performance needs to space to breath, and here, her charisma extends beyond the confines of the fibreglass box you’re squeezed into.

Secondly, there are times when you get the feeling she’s just a little too absorbed in her character. Ironically, despite the closeness of the venue, there are moments of distance put between her and the audience as she wanders off into a musing, leaving the punters to watch rather than engage. Given the opportunity to produce some incredibly intimate and responsive theatre here, it’s an aspect that’s just a touch overlooked.

But overall, in both of her characters, she’s ineffably charming and engrossing to watch, and is as talented a performer as she is a writer.

Two surprisingly sublime nuggets of dramatic gold, if you happened to serendipitously stumble upon this last weekend.

Fairy Dregs and Friends plays at the Caravan Theatre, Bankside, SE1 9TG, as part of the Merge Festival. For more information about the festival, visit http://mergefestival.co.uk.