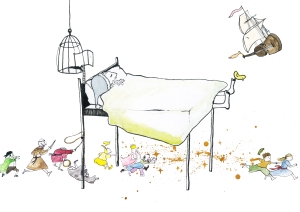 After the matinee showing of Nicobobinus on Saturday 20th December, Jones will be signing copies of his book from 4:30pm. Fans of Jones’ children’s book, young and old alike, should not only miss this opportunity to have him scrawl something on a beloved personal item, but should absolutely, definitely, see Red Ladder and DumbWise’s stupendous musical adaptation.

An utterly spellbinding adaptation of Terry Jones’ much loved children’s book. Has children and adults alike awestruck and enrapt.

Nicobobinus is a boy who can do anything! But one day, when a Golden Woman turns his arm into pure gold, him and his best friend Rosie must travel to the Land of Dragons in search of the only known cure: dragon’s blood. But their journey is fraught with peril, including murderous monks, surgeon pirates, and moving mountains.

Aye, you! Eilidh Debonnaire (front) as the Golden Woman, and Max Runham (rear) as Nicobobinus. Photograph: Courtesy of Ellie Kurttz.

Ward’s adaptation is one definitely aimed at a younger audience. It’s face paced, silly, and larger than life enough to keep the smaller ones involved at every moment of the way: laughing, gasping, and even quivering at dragons and dangers. It’s an epic weave of a tome with tremendous highs and perilous climaxes. Taking on Jones’ novel, Ward seems to tap into a humour that children thrive and love – just the right amount of silly and unpredictable: a posturing precisely honed at the level for small-folk. But simultaneously, there’s plenty for the adults too, including things like Monty Python and even Les Miserables reference jokes intelligently and unexpectedly placed. But most fantastically, there’s a universal comedy and tone that both parties involved lap up with relish.

The only thing that could possibly be lingered upon is that new-age morality that Jones injects, and that Ward perhaps stays on this a little too long at points. But even in doing so, it doesn’t take away from anything that Jones and Ward have conjured, or even dampens the pace and wonderment that the production adds to it. It’s just a noticeable thing rather than anything critical.

But overall, the fact that a two hour long show can keep children’s attention hook, line, and sinker without them fidgeting or chattering, is a mammoth achievement.

Eilidh Debonnaire’s score is beautiful, catchy, and energetic. It’s simple enough to grab the attention of the younger audience and to keep it, but complex and varied enough not to sound infantile in the slightest. Her scoring for an eclectic gaggle of instruments, from double basses and various saxophones to accordions, adds a rich and quirky sound which is just as interesting as the songs are sweeping and bouncy. But it’s not just in the songs that Debonnaire excels. There’s also some wonderful underscoring that replicates the imagination, rhythm, and the energy of the rest of the production.

Lyrics are straightforward and easy to understand for children, but still have a basic poetry that makes them skip and aurally intrigue. There’s really nothing bad I can say about the score: it’s pitch perfect for our pint-sized patrons, and also delights the parents.

DumbWise and Red Ladder theatre companies have produced a spellbinding production using incredibly resourceful means. All there is by means of set is the stage painted like a giant map, and two moving halves of a bridge that alter their positions to suggest everything from the canals of Venice, to giant walls, and even a pirate ship. Couple with this projected images and textures upon the set and stage, it prompts a fervid imagination among the audience to fill in the blanks. Where imagination can’t quite deliver, Joshua Pharo’s video work keep the pace going using luscious animated illustrations. It adds to further wonder and variation that keeps adults and children engrossed. Elsewhere, Ward, also directing, ensures that there’s rarely a static moment, also using length, breadth, and height of the space to almost dizzying effect!

Everything in this production is spot on and well thought out. A maelstrom of colour, activity, and wonder: it’s captivating.

If the adaptation, the music, and the production wasn’t perfect enough, there is also an amazing cast involved. Max Runham as titular Nicobobinus is exceedingly sprightly, bounding about the stage with ferocious energy. Indeed, on press night his fervour and dedication was so much so that he ended up sustaining an injury, coming on for final bows with a bloodied nose! Samantha Sutherland as Rosie matched him stride for stride, and together they’re exude an almost exhausting power and child-like quality between them, perfect for the roles of our exuberant hero and heroine.

But they are supported by a trio of supreme comic talent: Debonnaire, Jofre Alsina, and Lloyd Gorman. As excellent entertainers, they are side-splittingly hilarious to watch. Excelling at everything from facial physicality to physical high jinx and marvellous vocal characterisations, they keep both adults and children in roars of laugher throughout. They also work effortlessly together to create a close-knit ball of comic energy that is unbearably funny.

Out-rightly one of the most magical pieces of theatre I’ve seen as both a child and an adult. A dazzling Christmas show that will have each and every member of the family utterly dumbstruck with amazement.

In just over a week’s time, I’ll be launching a serial feature on my YouTube channel, #FreshOffTheStalls. Starting on 1 December 2014 “#Pantomonium” will take a look at pantomime and Christmas shows past and present, and look at the state of current day seasonal theatre.

Featured in the series will be DumbWise theatre company, who are bringing their family musical adaptation of Monty Python’s Flying Circus star Terry Jones’ children’s book, Nicobobinus, to the LOST Theatre this year in association with Red Ladder Theatre Company.

As well as chatting to them about what makes a Christmas show and how this differs from pantomime, I was allowed to film them during a rehearsal. Therefore, as a sneak peak for the series and an EXCLUSIVE clip of their upcoming show, I’m proud to present a rehearsal excerpt of “Morning In Venice”, the show’s opening number.