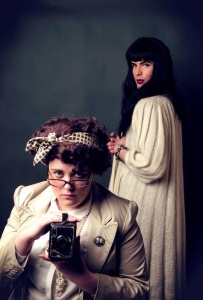 A twisted powder-keg thriller blending reality and fiction for a sharp and glamorous play looking at truth, fact, and obsession.

Associated Press photographer, Tabitha Montgomery, lives in Paris. After badly spraining her ankle in Montmartre, she’s housebound with only her American houseboy, John, an arsenal of wine, and the luxury of spying on her neighbours across the courtyard to keep her company. Female impersonator and film artists Violette moves in across the way, for which Tabitha has the perfect view of from her apartment window. One night, Tabitha is awoken by a scream and the sound of glass breaking. When she spies Violette with blood on her hands, Tabitha is convinced that Violette has murdered her dance partner, and starts on a quest to prove her suspicions. But at what cost? And when does investigative intuition turn into dangerous obsession?

Taking on something that is arguably Hitchcock’s most acclaimed film is something that is always going to be difficult to live up to. Thankfully, Loizou doesn’t try to emulate Rear Window but merely use it to frame his own unique razor wit and a colourfully imaginative exploration of the thin line between fact and fiction and paranoia and prejudice. The result is an uncanny and debauched comic-thriller, which, although laced with plenty of catty quips and flamboyant put-downs, still manages to intensely explore its themes, throw in a few marvellous red herrings, and keep an absolutely tight and suspenseful grip on the audience to the very last beat. It’s as if Loizou was the love-child of Noel Coward and Agatha Christie: cheeky, yet masterfully capricious.

As much Loizou captures the sass and dirty glamour of 1920s Paris, what’s most astonishing about the writing is Loizou’s turn at suspense. This is not just in re-enacting Hitchcock’s infamous scene where Jeff watches Lisa snoop around the apartment opposite for clues, but in the play’s climax. It gets so intense that you honestly can’t tell for love or money which way things are going to pan out, especially as one of the possibilities places a character in considerable peril. You’re absolutely hooked in this nail-biting crescendo whilst, amazingly, Loizou manges to simultaneously deliver a bewitching finale that leaves you haunted.

Whilst this is an incredibly small scale and humble touring fringe production, Andrew Denyer’s set, whilst simple, does it’s job marvellously. The three windows attached to Tabitha’s apartment also double as those at Violette’s far away abode. It looks a bit odd at first, with the issue of proximity being hard to ignore. But cast ability and direction draw the audience’s attention and imagination to do the work for them, suspending the belief and building the suspense. It’s a straightforward yet inventive solution to what could have been the biggest problem and tripping point for the entire production. It also bristles with wonderful art-Deco style that really compliments the wit and epoch that the show is set in.

There are also some really striking uses of projected image, fractured and distorted by being projected directly onto the set, adding a real atmosphere of sinister enigma especially given the wonderfully Man Ray-esque nature of Loizou’s video work here. It’s a production of real ingenuity that pays dividends in lieu of having the means to do something grander: an exquisite execution of essence beyond budget.

This three hander is also incredibly well delivered by the small company’s cast. Loizou takes on the role of John, and has plays him with a wonderful coy campness that crumbles into boyish vulnerability when Tabitha manipulatively picks apart his façade. Fragile, yet brimming with energy and venomous wit, he marvellously toys with the writing’s unexpected juxtaposition of camp hilarity against brooding jeopardy.

Laura Louise Baker as Tabitha is a little difficult to warm to initially, playing Tabitha as too steely, hurried, and terse to begin with. But quickly, she starts to command her performance and really dominates the stage. She brings a stark authority to Tabitha that, for better or for worse, exudes a gravitas that has you completely convinced that she’s the one closer to the truth than anyone else. Severe and expertly conniving, both her and her character are forces not to be reckoned with.

Jaacq Hugo is ethereal as the Barbette-inspired Violette. He oozes a mysterious suavity that is so chic it hurts. But most the astonishing aspect of his performance is when Violette is not Violette. Here, he turns into a brutal adversary of unnerving power, adding to the twisted and dangerous feel of the play. His switch from fay siren to threatening hulk is tremendous.

Together, the three conspire and clash meticulously, playing both sides of their characters off whatever face the other decides to reveal. It’s these constant slick and untrusting fraught interactions between them that really compel.

A riot of Deco daring and wit. Suspense and comedy collide to create one of the most inspired and surprising plays this year. Tight, cutting, and edge-of-you seat thrilling, it’s murderously good.

Back Door played at the Tristan Bates Theatre 9-10 December 2014. For more information about the production, including upcoming tour dates, visit www.offoffoffbroadway.co.uk.