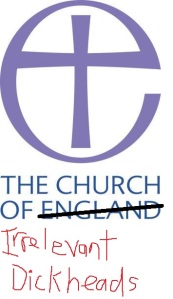 So, your synod has ruled to disallow any women becoming bishops. Congratulations, you are now utterly irrelevant. Please quietly fuck off.

Your decision has shown that you are completely and willfully against the values of progressive humanity. Therefore, given your cocksure and shameless disregard for modern thought, you MUST remove yourself from any debate on secular issues as you have demonstrated that you do not represent societal dictum.

By refusing to treat women as equals, a basic maxim that a vast section of society embrace and celebrate, you have absolutely NO RIGHT to exert opinion in debates in British society that are of a secular nature, such as equal marriage and abortion.

Although we never quite understood why secular issues need the sway of religious opinion in the first place. For example, the campaign for EQUAL marriage (it’s not about being ‘gay’, but about ending institutional discrimination of enforcing separate legal identities between same sex and heterosexual couples) is about redefining the legal boundaries of how two people join together as a single supportive civil unit, not about expediting the end of days. Whilst some of us may disagree with many religions’ stance on homosexuality you still have every right to that opinion. But a change in the law will have no effect on religion’s right to an opinion, or have any direct affect whatsoever on the everyday practise of faith. It’s purely a civil matter we’ve never been too sure why you deem it fit to vomit your narrow minded viewpoints unceremoniously and uninvited into the discussion. Scared of losing influence on society, are we?

And with regards to abortion, if you cannot treat women as equals to men, what insight, empathy, or right do you have to bully control over the choice a woman?

This isn’t even about Christianity being irrelevant; it’s about you and only you as an established British religious institution being irrelevant. Non-conformist denominations and many Christians we know and are friends with/related to think women should be equal to men, legally and spiritually. They practise their faith open-mindedly and with regard to the wider community to which they belong. They face full-on and with fervour the challenges that being a Christian in modern society can bring, approaching conundrums of morals not only with faith and scripture, but with common sense and critical capacity. We admire this even if after all is said and done we still might not see eye to eye.

But they still adhere to and support BASIC human rights such as sex equality. Seeing as Christianity’s (and arguably also Judaism’s) stance on the relevance of some rather misogynistic ramblings of the Old Testament is not exactly clear cut, ‘God said so, guv’nor,’ is not a legitimate excuse for ignoring this.

So, seeing as you refuse to align yourself with the majority of thought in the UK, you’ve merrily cakewalked into utter fucking irrelevance. So, as we’ve said once before, please quietly fuck off. Go wank yourselves in that dark and obscure corner you’ve built yourselves over your bloated sense of superiority  just because you believe in a higher power and have been inexplicably venerated to a position of supposed pseudo-influence.

PS. Obviously this rudely worded opinion is aimed at the admittedly slim majority of the Church of England who voted in the way that they did. We greatly admire all those who attempted and pushed for change within the institution, including the Archbishop himself. However, have you considered becoming a Methodist? They’re really not as miserable as people make out to be. Can’t be any worse than the crock of bastards you’re currently surrounded by…

PPS. Many of us have signed a petition to have your automatic seats in the House of Lords removed given the circumstances outlined above. Watch the number of denizens grow who don’t want fuckwitted piss-artists like yourselves have even a scintilla of influence over secular law making. http://epetitions.direct.gov.uk/petitions/42117