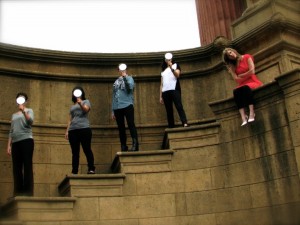 An original and surprising examination of the personal plight of Helen of Troy: the face that launched a thousand ships.

Six actors become Helen, each taking on an aspect of key moments of her life in Homer’s Iliad. They explore what her thoughts and feelings would have been as history’s most infamous beauty queen.

There is a wonderful depth and humanity here to a character we too often see as a prize rather than a human being. Each moment paints Helen as a flawed but deep and thoughtful character. Caught between fate, her own vanity, and violent patriarchy, she’s faced to consider things like abandoning her children, and being the cause of death for thousands. Writers Megan Cohen and Amy Clare Tasker have hit on some very real and challenging questions about how we view Helen, by portraying here as a simple, albeit beautiful, woman.

What’s wonderful is the mixture of anachronisms in the text. There are some very modern references within it that have the potential to jar against the otherwise very ancient Greek setting of the actual narrative. But these little idiosyncrasies, instead of alienating the audience from the story, actually manage to bring them further into it. This is because it makes the actors on stage seem more real and believable as people and the issues more relevant bringing about a very involved engagement with the piece.

Furthermore, there is some intense moments within the text. Moments where Helen talks of her children are pretty tough to sit through bringing home of the horrors of the story and highlighting some tough decisions that you’d never have thought Helen would have made: a stark reminder that Helen, for all the academic analysis of her part in the classic legend, was still a woman and a mother. Furthermore, there are moments where Helen turns into rabid poet, especially Last Night of the War Helen. Cohen and Clare Tasker’s writing here is at it’s most rhythmic, descriptive, and dark, especially at points where we see Helen mock the human contents of the wooden horse that has turned up on her doorstep. It’s ravishing and riveting. Throughout all of this we’re privy to some very intelligent provocations challenging our thoughts on patriarchy, beauty, and gender.

Scenes are also cleverly interspersed with sound walls of cold essays and unfeeling analysis of the story combined with impactful physical theatre from The Face, making us consider just how easy it is to callously we pore over Helen. This provides some wonderful juxtaposition and variation of pace throughout the piece.

In transferring the show to the LOST Theatre for the festival, Clare Tasker and fellow director Sharon Burrell have made some bold decisions. Under the advice of festival director Colin Watkeys, they have switched the performance from having all six Helens being on stage at the same time to each coming out only when it’s their part: a slight twist on Watkeys’ own exploration of his “chorus of one” as executed in Adult Child/Dead Child earlier on in the festival. It absolutely works as we’re able to fully focus our attention on the actor and the character than potentially get distracted by Helens who wait to have or have had their turn.

Furthermore, Clare Tasker and Burrell make great use of the LOST’s space. For example, using the hidden openings in the cyclorama/building structure to add height and drama to The Face during scene changes. Elsewhere, they capitalise upon the generous stage making sure that their cast use it as giving them room and space to breath and explore. With nothing but a few props evoking a more ancient time, each actor makes use of the stage without ever seeming overwhelmed or lost in it. Clare Tasker and Burrell’s lighting, complimented by Xander Edwards sound designs, add elements of aesthetic that really lifts the piece. Specifically, the subtle but striking sunrise pouring out from the wings, accompanied by the sound of distant burning at times, is a lavish garnish that really lifts the show.

Most interestingly, the choice of cast is another very meticulous vehicle for using Helen’s plights as a means of exploring gender and beauty. Each of the cast members bring their own individual sense of physical attraction, each with a unique body type and all of which look stunning in their own skin. This makes us question our own notions of beauty, and what exactly were the parameters that made Helen so universally “beautiful” to cause such a catastrophe of mythic proportions. It’s a clever little nuance that marks the piece out as something that’s as thoughtful as it is entertaining.

It’s so difficult to pick out any particular performance, as all the cast as superb, relishing their moment as Helen on the stage and bringing their own distinct watermark of interpretation to the character. For example, Rachel Handshaw is vicious as Helen with her manipulative scheming about how she should be found by her victor, and taunts at the heroes patiently trapped inside the horse. Angela Bull, however, emobodies and wonderfully dry and snide take on Helen’s personality that’s a hoot. Yet, you get the impression that if you swapped any of the Helens into different roles, you’d get just as interesting and varied an anthology as you would in the way that it was done here. In short, each actor wholly owns their part, and they work wonders by doing so.

Poignant, provocative, and engrossing, you’ll never look at the Iliad in quite the same way again.

The Helen Project was performed at the LOST Theatre, London, SW8 2JU as part of the Face to Face Festival of Solo Theatre, which took place 6-11 October 2014. For more information about the festival, visit www.solotheatrefestival.co.uk.